The New York Metropolitans were founded in 1962 to fill the void of the departed Giants and Dodgers, and started out with an atrocious 40-120 in their first regular season. In fact, they never finished better than second to last until the "Miracle Mets" of 1969, giving them the first of two World Series Titles. They have won five NL Pennants, the NL East six times and gotten wild card berths three times. Despite their standing as the "lesser" NYC team, they are going to pack a punch here and will put up a really strong fight to get out of this division.

The Mets have one of the deeper lineups, with every player coming in above 5.38 expected runs, however their highest is 6.02, so they won't feature that truly dominant individual player. Leading off will be the speedster Jose Reyes who brings a ridiculous five triple chart with 23 speed and 10 OB for 6.00 expected runs. Batting second will be the top card in Brandon Nimmo at 6.02 expected runs, due to only 2 outs, and a bunch of extra base hits with some speed. These two will undoubtedly create a ton of RBI opportunities, which Conforto will use his 10 OB and 18 HR chart to ideally drive them in. At 5.97 expected runs he is right in line, and disgraced Mets manager Carlos Beltran 2006 is .01 behind him. Mr. Met David Wright is batting fifth, with his brand new 2007 card which comes in at 5.88 expected runs and gives a bunch of extra base opportunities. Pete "Polar Bear" Alonso will bat sixth and may appear to have a more power hitting card, but his 5 outs and lesser OB drop him, although still gives a great 5.67 expected runs. This highlights the depth of this lineup. 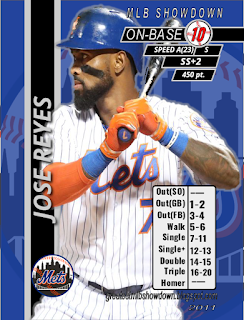 (remake of an old one but told you'd I'd get better) 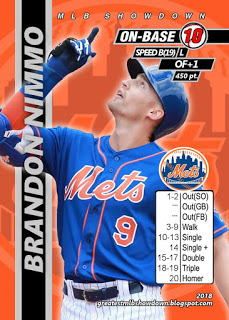 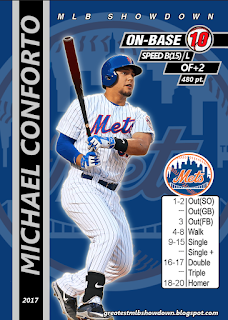 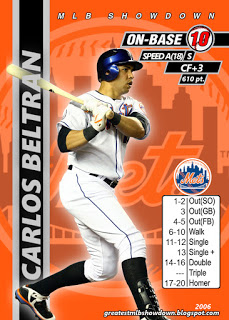 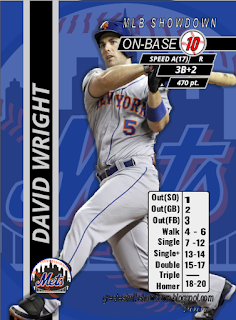 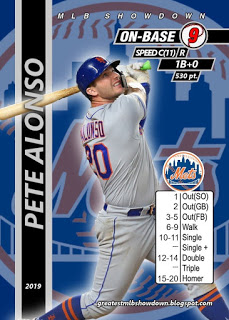 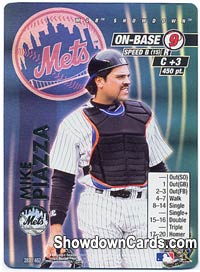 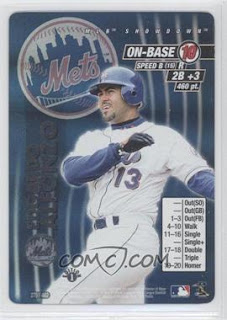 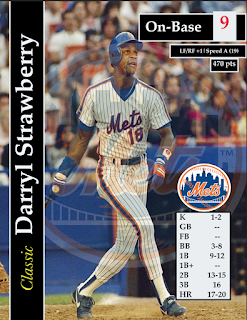 Batting seventh will be Mike Piazza's 2001 card that is a great 5.41 expected runs, although only gives a +3 arm which is a bit of bummer. Edgardo Alfonso's 2001 card is one I've always enjoyed, and provides 5.46 expected runs which gives us two great offensive cards at positions that normally are lacking. Strawberry is going to bat ninth, his 19 speed as well as ridiculous chart will cause problems for opposing pitchers to the tune of 5.85 expected runs. The rotation is going to be a big problem for opposing teams, and might one up the Phillies. Doc Gooden is the best starting pitcher card created, with 6 Control, 17-19 BB and no doubles over 7 IP he is going to make slight work of opposing lineups at 4.54 expected runs. Second is the other Mets legendary ace, Tom Seaver. Surprisingly no one has made his card before so I figured I'd give it a crack. He comes in at a ridiculous 4.99 expected runs, giving them two below 5, which is unheard of. As if it was going to get easier, Degrom's dominant 2018 card that would lead most rotations at 5.12 expected runs is third. He ptiched 8 innings of no hit ball against the 2019 AL All-Star team in a game I played, which should tell you how he'll handle the All Time lineups. 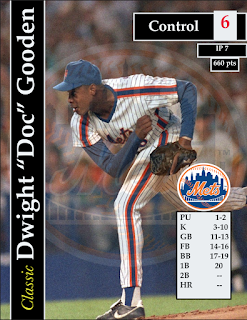 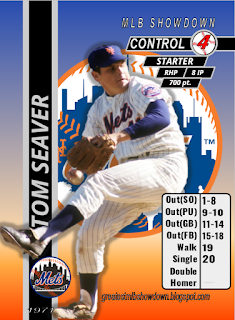 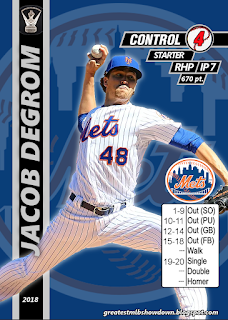 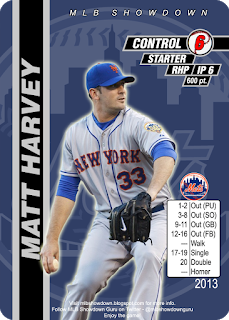 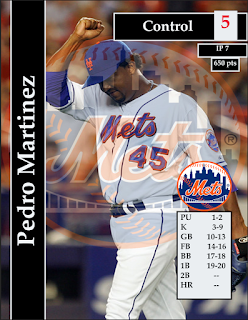 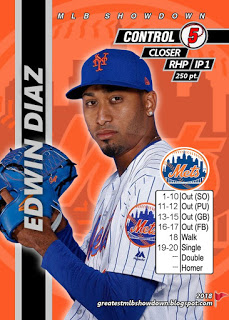 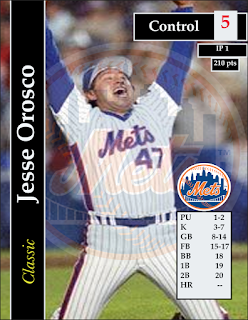 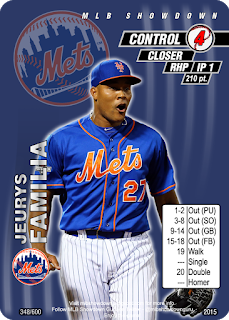 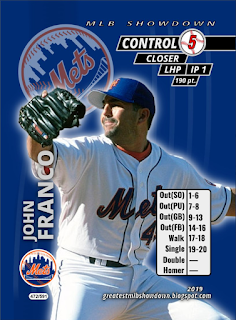 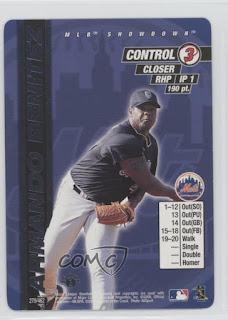 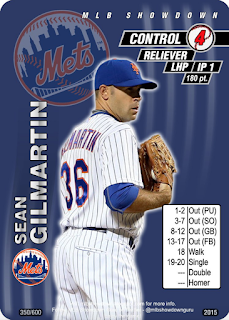 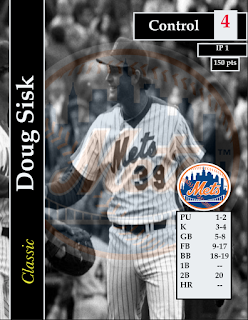 The last two members of the bullpen, Gilmartin and Sisk are a bit shakier at 5.68 and 5.83 expected runs, but are great options for the back end. On the bench our best pitching arm is Bob Ojeda, who lead the 1986 team with 18 wins, and gives us a 4 control, 17 outs and no doubles chart over 7 IP for a great 5.53 runs. RA Dickey isn't far behind and comes in at 5.53 expected runs. He would be a top two starter in a lot of rotations. I'll take the extra innings and roll with two starters here. For bats, Gilkey is the top option at 5.40, just ahead of McNeil at 5.38, Keith Hernandez 1986 at 5.29, and Rickey Henderson at 5.20. Hernandez is a no brainer since he gives +1 defense and a great 11 OB and McNeil's positional flexibility and great chart/OB make a great addition. 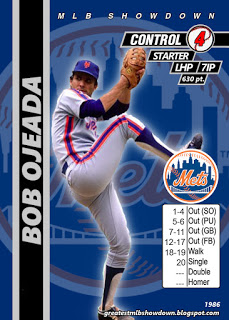 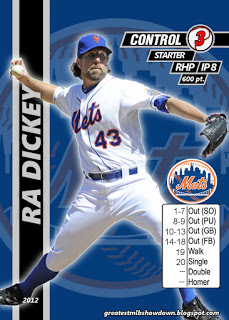 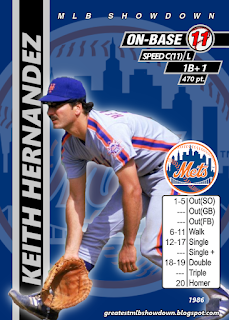 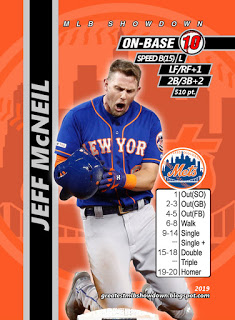 All in, this team is definitely going to be super competitive. One underrated facet is that their speed, with only Alonso/Hernandez bringing C speed. Their pitching will carry them and the depth of their lineup will ensure consistency. Overall their lineup is 4,380, which is on the lower side of average. Alonso and Beltran are the only ones above 500 points, but they have no one under 450 either so there are no easy outs. Their rotation is a studly 3,180 which shows how good they will be - with Harvey being the only player under 600, and definitely underrated at 500. Their bullpen is 1,380 points which is also on the lower side of average, but will work. The bench is 2,100 points which is extra beefy. This gives them a total of 11,040 which puts them in the top tier status. 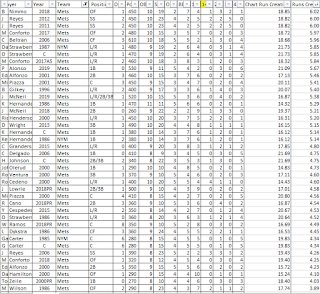 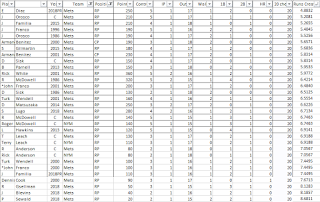 With the addition of Tom Seaver and David Wright, we are looking at the best possible team the Mets can field. It will be extremely interesting to see how they play out with the dominant arms and deep lineup. Here's an extra Tom Seaver card, also based on his 1971 season, but done in the classic format. It comes in at 5.26 expected runs, which is still very much ace status. 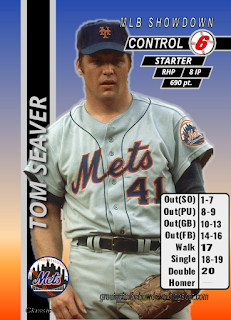 The final team in the NL East is the Nationals, the reigning World Series Champions.

Also due to demand, here's an additional Billy Wagner card that adds some fire to this bullpen 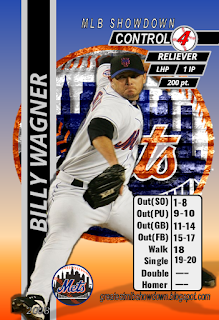 Posted by mcelduffm at 9:21 AM

Email ThisBlogThis!Share to TwitterShare to FacebookShare to Pinterest
Labels: All Time Teams